All animals deserve our #reverence and #respect.  This wonderful video message from Kinder World ( Animals talk. We just need to listen! ) should  reinforce our determination to #stopanimaltesting #EndAnimalTesting #endanimalcruelty

Is it ethical to use animals in lab testing?

“Each year, millions of animals are poisoned, physically assaulted, operated on without anesthesia, and are painfully subjected to harmful toxic chemicals on their skin, in their eyes, and are forced to inhale them. Animal testing is extremely cruel physically and psychologically, and there are no laws that protect them or prevent the deep and ongoing cruelty.” 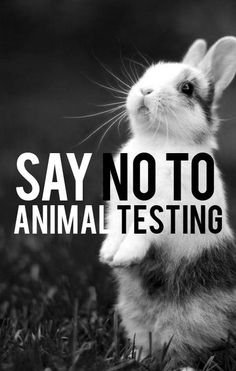 “It is a system of sadistic torture, vivisection, and animal genocide, which has been carried on for decades under the fraudulent guise of respectable medical research. And nobody on the outside knows, or wants to know, or is willing to find out. People have been hopelessly brainwashed on this issue." (Michael Tobias, Rage and Reason) tags: animal-cruelty, animal-rights, animal-testing, vivisection

downtoearth.org reports: "Animals endure chemicals being dripped into their eyes, injected into their bodies, forced up their nostrils or forced down their throats. They are addicted to drugs, forced to inhale/ingest toxic substances, subjected to maternal deprivation, deafened, blinded, burned, stapled, and infected with disease viruses. These treatments are exempt from anti-cruelty statutes, and worse yet, undercover investigations have exposed violations of animal welfare policies and cases of extreme negligence at labs and universities."

This beagle spent years stuck in a laboratory cage and she's about to get adopted by the best family ever. She has no idea how good her life's about to get!

“If these atrocious acts were committed outside laboratories, they would be felonies. But animals suffer and die every day in laboratories with little or no protection from cruelty. The National Institutes of Health reports that 95 out of every 100 drugs that pass animal tests fail in humans”

“Animal experiments are cruel, unreliable, and even dangerous.”

All in the name of 'science'?

"Dogs, cats, rabbits and many other animals still suffer pointless and painful procedures in the name of product testing. Some will undergo irritancy tests that cause severe chemical burns to their sensitive skin; others will be forced to ingest harmful chemicals that can lead to fatal poisoning."  (https://www.animalsaustralia.org/take_action/stop-animal-tests/)   STOP THIS CRUELTY!

“There is convincing evidence that most epidemics and pandemics, including Covid-19, have actually been caused by humans “playing god” and exploiting animals. We need to wake up. I won’t be accepting the vaccine. After what has been done to so many defenceless animals, it feels wrong to me. When I say it’s time to stop exploiting animals, I really mean it.”  (Chas Newkey-Burden – The Ugly Truth About Coronavirus Vaccine Testing – https://www.huffingtonpost.co.uk/entry/coronavirus-vaccine-animals_uk_5faa9c6bc5b64c88d405023e  )

“Each year inside British laboratories, around 4 million animals are experimented on. Every 8 seconds, one animal dies. Cats, dogs, rats, mice, guinea pigs, rabbits, monkeys and other animals are used to test new products, to study human disease and in the development of new drugs. They are even used in warfare experiments. Animal Aid opposes animal experiments on both moral and scientific grounds. Animals are not laboratory tools.”

UK Home Office figures reveal that MORE THAN TWO-THIRDS of the 3.5 million procedures conducted on animals in Britain labs in 2018 concern genetic modification.

1.7 million were for the `creation and breeding´ of animals with genetic modifications and 729,163 experiments on GM animals.

Despite the known problems of natural species differences, GM animals are created with a particular defect in order to “model” human disease. Just 3-5% of the animals created actually carry the defective gene - meaning that vast numbers of animals are killed, because they are unwanted.

Animals suffer from both intended and unintended mutations as well as prolonged suffering for breeding - with repeated surgeries, egg collection, implantation, and repeated blood and tissue testing. 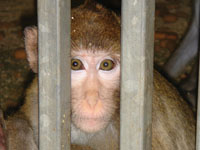 (Report from the National Anti-Vivisection Society)

Thousands of animals suffer each year during Chemical Warfare experiments conducted by the Ministry of Defence.  Examples:

" Mustard gas was pumped down the throats of 16 anaesthetised pigs and into their lungs. 40 marmoset monkeys were exposed to various strains of the bacteria Melioidosis, which causes respiratory disease, Observed for up to three days, the monkeys suffered fever, with some exhibiting severe, extensive disease in the liver, lungs and spleen.  Marmosets have also been forced to inhale the pathogen tularaemia while in a head-only exposure chamber. Inducing the disease and death . 24 macaque monkeys were exposed to the Monkey pox virus. Mice were forced to inhale the Western equine encephalitis virus (WEEV) for 10 minutes while physically restrained in tubes. A number of the animals died as a result, while others were killed over a period of two weeks due to the severity of their symptoms. These included shallow breathing, seizures, tremors and an inability to move, even to reach their food. "

(Quote}  "We have enslaved the rest of animal creation and have treated our distant cousins in fur and feathers so badly that beyond doubt, if they were to formulate a religion, they would depict the Devil in human form." – William Ralph Inge (British Author)

PETA (People for the Ethical Treatment of Animals) has exposed the NIH Director Anthony Fauci's disgraceful funding of weird HIV/AIDS experimentson lab monkeys, involving injecting males with female hormones. Scientists plan to monitor how the hormones impact the males' immune systems. Fauci has been linked to research injecting monkeys with HIV dating back to the mid-1980s. His agency has contracted to acquire some 500 of the animals annually from an island in South Carolina where they are bred specifically for US government lab experiments.

PETA (People for the Ethical Treatment of Animals)

EVIL lab torture of defenceless animals MUST STOP, these so-called scientists should hang their heads in shame. These experiments are inexcusable #CrimesAgaInstNature 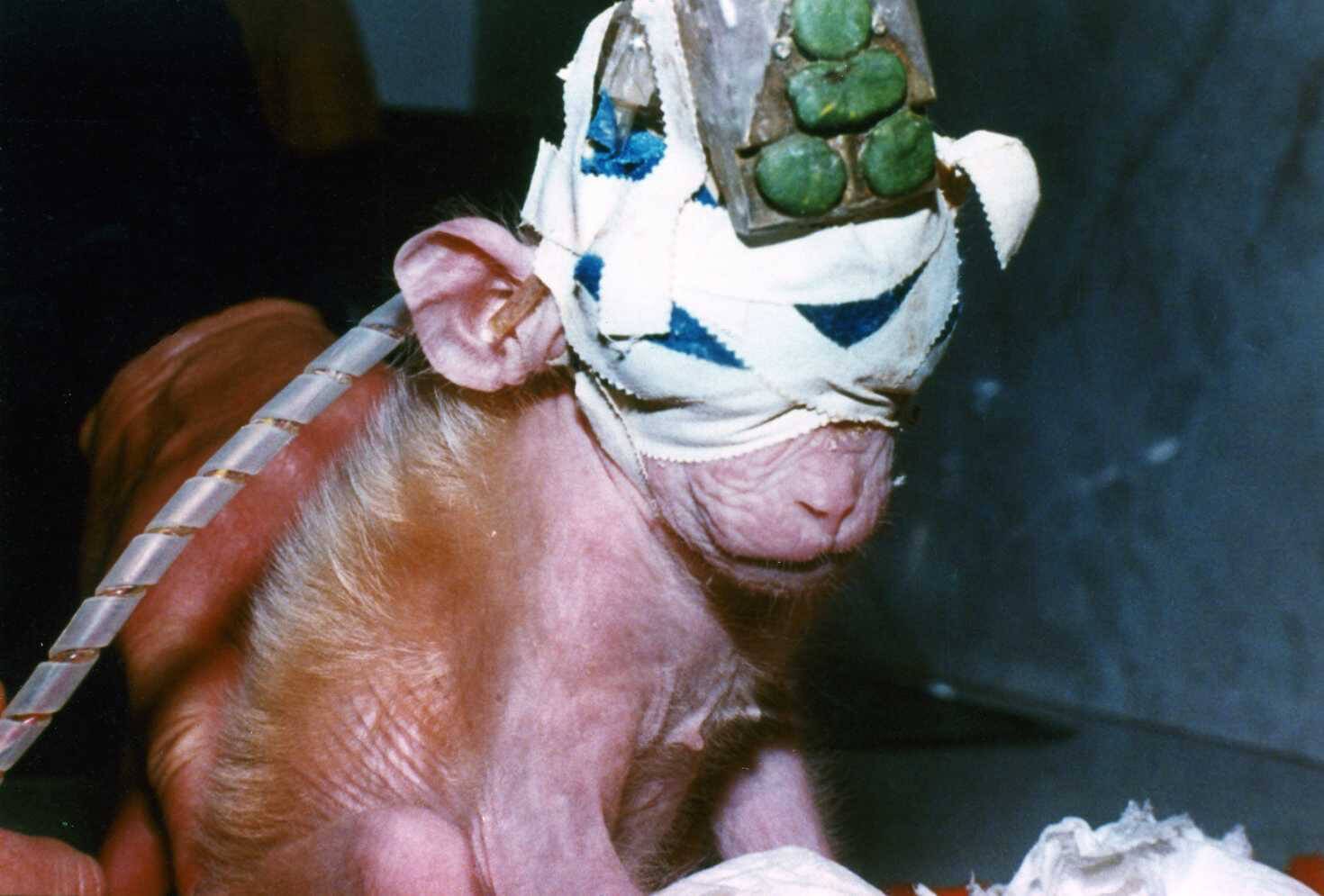 Britches was an infant monkey at the University of California–Riverside who was torn from his mother shortly after birth, had his eyes sewn shut, and had an electronic sonar device attached to him that let out a constant screeching sound. In 1985, activists rescued hundreds of animals being used in cruel experiments at the university, including cats, rabbits, and mice—and, of course, Britches. He was found alone in a barren metal cage, clutching a crude laboratory contraption that was intended to serve as a surrogate mother. THESE SICK CRIMES AGAINST NATURE STILL CONTINUE DAY AFTER DAY IN THE NAME OF 'SCIENTIFIC RESEARCH'

DECLARATION: " I AM OPPOSED to the suffering and slaughter of animals in laboratory research, experiment, development, production or testing.  I wholeheartedly concur with the view that   ‘It is supreme human arrogance to think that we can inflict this torture on animals in labs without it coming back to bite us’ "